MOL Wraps Up LNG Bunkering Trial in Port of Kobe 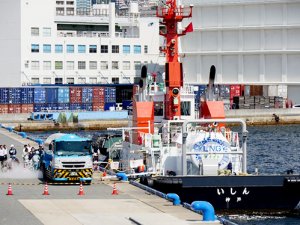 Japanese shipping company Mitsui O.S.K. Lines (MOL) has undertaken an LNG bunkering trial on the LNG-fueled tugboat Ishin at the Port of Kobe.

Organized by the Kobe City Port and Harbor Authority, the operation marked the first LNG bunkering in the Port of Kobe and confirmed that LNG fuel can be supplied safely at the port.

LNG fuel for the trial was hauled by a tanker truck from the Himeji LNG Plant, Hyogo Prefecture.

The LNG-fueled tugboat Ishin, owned by MOL and operated by Nihon-Tug-Boat, was supplied via a truck-to-ship system at the port’s Shinko pier.

The milestone was made ahead of the upcoming IMO 2020 Sulphur Cap, to be implemented in January 2020. In response to the new standards, an increasing number of LNG-fueled vessels are coming into service, making the development of LNG bunkering ports in Japan an urgent task.

The tugboat, delivered in February 2019, is the first such LNG-fueled vessel in western Japan. The unit will escort large-size freighters during port calling in/out operations, while MOL collects know-how on LNG-fueled vessels through its operation.

This news is a total 523 time has been read
Tags: Kobe, LNG Bunkering, Mitsui O.S.K. Lines.