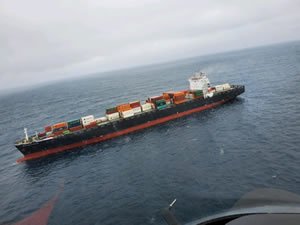 Japanese liner shipping company Ocean Network Express (ONE) says cargo discharge operations for the NYK Delphinus are planned to begin next month at the Port of Oakland, almost 3 months after an engine fire off the coast of California.

ONE has a target start date of August 9, subject to final confirmation.

The NYK Delphinus contacted U.S. Coast Guard on the morning of May 14th reporting an engine fire with 24 people on board approximately 50 miles west off the coast of Monterey.

There were no injuries to crew members and no reported signs of pollution. The fire was brought under control and the ship was eventually towed to the Port of Oakland. Among the cargo were a number of refrigerated reefer containers that had lost power in incident.

NYK Delphinus is operated on THE Alliance’s AL5 service string and was traveling from Fraser River, Canada at the Port of Vancouver to Oakland, California at the time of the fire.

The Liberia-flagged ship is about 295 meters in length by 32 meters wide and was built in 2007.

The owners of the vessel declared General Average in May. Cargo owners are reminder that discharged containers can only be released after the General Average Security is submitted and confirmed by the adjuster.

ONE notes that the GA security has still not been submitted for a “significant” number of containers. General Average requires that the shipowner and its customers share a proportionate amount of the costs associated with saving a vessel after a major casualty.

When General Average is declared, cargo owners are required to contribute to a GA fund before cargo can be released.

This news is a total 2693 time has been read
Tags: AL Alliance , NYK Delphinus , engine room fire , ONE , Japanese liner