Moody's Downgrades its Outlook for Shipping 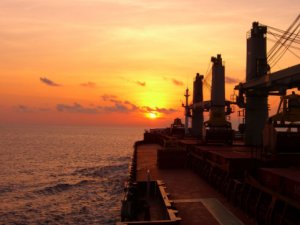 The ratings agency Moody's has downgraded its forecast for the deep-sea shipping industry this year, and it now expects that earnings will contract by as much as 18 percent compared with 2019.

"We now expect the aggregate EBITDA of rated shipping companies to fall by around 16%-18% in 2020, nearly doubling from our previous projection of a drop of around 6%-10%," said Maria Maslovsky, vice president and senior analyst at Moody's.

The analysis differs markedly by sector. The outlook is stable for tanker operators, as tanker rates have benefited from unusually high demand for floating storage. However, these rates are set to come back into line with long-term averages in the second half of the year, Moody's predicted, and oil demand could potentially be impacted by another round of COVID-19 outbreaks.

Throughout the pandemic's first six months, the container segment has done remarkably well by adjusting its capacity to meet demand. Freight rates on core routes - and for some carriers, overall earnings - have exceeded last year's levels. However, Moody's cautioned that while the carriers have shown restraint in allocating tonnage, they could still be challenged by another wave of COVID infections, which could endanger demand for consumer goods in North America and Europe later in the year.

The dry bulk market remains highly volatile, according to Moody's. The fall in iron ore cargoes from Brazil after mining company Vale's dam failure in 2019, when combined with a significant influx of new tonnage scheduled for this year, pose notable risks. Moody's forecasts that the bulker fleet will grow by 22 million DWT this year, or about three percent, while demand will contract by four percent. The rate of deliveries in 2020 will be the highest in the last five years. These challenges will only be partly partly offset by the resumption of industrial activity in China, the world's largest customer for dry bulk imports, Moody's assessed.

This news is a total 2310 time has been read
Tags: Moody's Downgrades its Outlook for Shipping