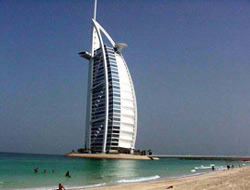 An hotel being constructed by Azeri businessman Telman Ismailov in southern province of Antalya's Aksu region is set to surpass world's most luxurious hotel in Dubai namely Burj al-Arab.

World's most luxurious hotel in Antalya

An hotel being constructed by Azeri businessman Telman Ismailov in southern province of Antalya's Aksu region is set to surpass world's most luxurious hotel in Dubai namely Burj al-Arab.

Mardan Istanbul Palace is expected to re-define the concept of luxury in hotels throughout the globe. Ismailov's new hotel in Antalya Aksu will cost 400 million USD to complete.

To date, the most costly hotel in Turkey was Calista Luxury Hotel that cost 150 million USD to construct.

Rooms in Mardan Istanbul Palace will be rented for fees ranging from 400 USD to 20,000 Euros.

Hoteliers in Antalya predict the prices of rooms in luxury hotels to go up once Mardan Istanbul goes into service at the end of May 2008.

The swimming pool of the hotel will be 24,000 square meters large and will be the world's second biggest swimming pool.

The swimming pool will resemble the Istanbul Strait --Bosphorus. The pool will be surrounded by restaurants.

The most attractive restaurant will be placed at the center of the pool resembling the 'Kiz Kulesi' (Leander Tower) in Istanbul.

There will be seven restaurants at the entry level. Ismailov spent 17 million USD for silverware to be utilized in the restaurants.

Interior decoration of the hotel is being made by Zeynep Fadillioglu. All decorative materials resemble historical artefacts from the Ottoman era. Ismailov paid 80,000 Euros for a single sofa dating back the Ottoman era.

The swimming pool will have two bridges connecting the two sides of the pool. The bridges resemble the Galata Bridge masterminded by Leonardo Da Vinci.

The ceiling of the main saloon will be gold-plated. While the main body of the hotel will resemble the Dolmabahce Palace, the garden floor will resemble the Covered Bazaar (both in IstanbulIsmailov is making preparations to construct another hotel with a 3,000 rooms capacity for sportsmen and a stadium with a capacity of 8,000 seats near Mardan Istanbul Palace in Antalya.

The hotel is being constructed by Turkey's Zafer Construction Company. Around 2,500 workers and engineers took part in the construction of the hotel.

Telman Ismailov has investments in Russia in 31 different sectors. He invites world famous stars to jubilees on his private days. In 2006, he paid 2.1 million USD to Jennifer Lopez. He also owns around 2,000 luxury watches.

This news is a total 1270 time has been read