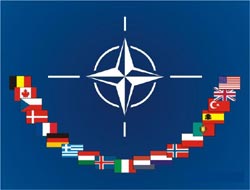 NATO will send more warships to fight pirates off the coast of Somalia that threaten the shipping lanes for a tenth of the world?s trade.

NATO will send more warships to fight pirates off the coast of Somalia that threaten the shipping lanes for a tenth of the world"s trade.

NATO will send more warships to fight pirates off the coast of Somalia that threaten the shipping lanes for a tenth of the world"s trade. North Atlantic Treaty Organization defense ministers agreed today to restart patrols in the Gulf of Aden, a choke point for oil tankers and cargo ships passing through the Suez Canal toward Europe and the U.S.

?You can expect to see another NATO naval operation off the coast of Somalia in the spring,? alliance spokesman James Appathurai told reporters in Krakow, Poland. ?Details remain to be worked out.?

Armed gangs using conflict-ridden Somalia as a safe haven attacked 165 ships and hijacked 43 last year in the Gulf of Aden. The increase from 58 attacks and 12 seizures in 2007 prompted an overlapping international coalition -- the U.S., NATO, the United Nations and European Union -- to dispatch frigates and escort ships to protect the sea lanes.

Currently, around 20 warships are on patrol off the coast of Somalia, guarding the approaches for the 50 cargo vessels that enter and exit the Suez Canal daily. About 30 percent of Europe"s oil supply, or 3.5 million barrels a day, passes through the canal.

NATO"s first mission, involving three ships, lasted seven weeks until the alliance handed off to a six-ship patrol under the EU flag in December. The U.S. commands a three-ship fleet known as Task Force 151, while Russia, China, Malaysia and India have also sent ships.

The deployment was NATO"s first to the Gulf of Aden, another step toward widening the alliance"s role beyond its original mission to defend European territory. NATO claimed credit for safely escorting 30,000 tons of food to Somalia.

The EU fleet -- the 27-nation bloc"s debut naval mission -- saw its first action Dec. 27 when a helicopter from a German frigate repelled pirates attacking an Egyptian bulk carrier and destroyed their weapons.

In regular confrontations on the high seas, warships from the world"s most powerful militaries have shot at, sunk and seized small pirate craft, freeing hostages and confiscating weapons, drugs and cash.

Some owners have paid ransoms to get their ships and crews back. In the most notable case, Ukraine this month airdropped $3.2 million to a gang of 10 pirates to win the release of a cargo ship ferrying 30 Soviet-designed tanks to Kenya, ending a four-month ordeal for the 21-man crew.

In November, pirates seized a Saudi tanker carrying 2 million barrels of crude oil, letting it go two months later after a ransom was parachuted onto the ship.

A Dec. 2 UN Security Council resolution gives naval forces the right to use ?all necessary means to suppress piracy? in Somali and international waters, and to destroy pirate ships and weapons.

Two weeks later, the Security Council passed a resolution allowing pursuit into Somalia, a country without a functioning central government since 1991. Somalia"s internationally recognized Transitional Federal Government is battling an insurgency and controls only part of the capital, Mogadishu.

Trapped in a vicious spiral of poverty and crime, Somalia tops the rankings of the world"s ?failed? states, according to a 177-nation scoreboard compiled last year by the Fund for Peace, a Washington-based research group.

This news is a total 3331 time has been read