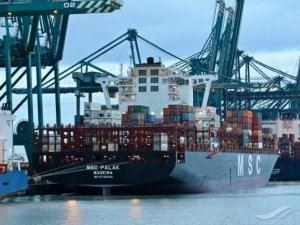 MSC has confirmed the loss of more than 20 containers overboard from its 9,400TEU container vessel MSC Palak near the port of Nqgura (Coega) on 14 July.

The 2016-built container ship left the South African port and was caught in rough weather in Algoa Bay near the city of Port Elizabeth, Eastern Cape.

“At 23:37 on 14 July 2020 of a report was received from Port Control that the MSC Palak had lost containers overboard while at anchor. An initial assessment was that six (6) containers had fallen overboard and that they had sunk, however, at first light on 15 July, the vessel confirmed that in fact 23 containers were lost overboard,” South African Maritime Safety Authority (SAMSA) stated.

A fishing vessel reported on 15 July in the morning that they found containers drifting approximately seven nautical miles south of where the containers were lost.The Swiss-based company claimed that the missing containers were mainly filled with biodegradable cargo and no dangerous or polluting cargo was spilled overboard.MSC said it is in contact with local authorities to provide them with all necessary information about the contents of the lost boxes and surveyors were already quickly appointed to search for the missing containers.

The second-largest container carrier in the world added it has appointed experienced response companies to conduct further investigations and salvage operations.The Port of Ngqura was closed for vessel traffic due to the risk that some containers may have sunk in the approach channel, becoming a danger to navigation.MSC Palak has subsequently returned to Coega where it was berthed for further surveys, according to the shipping firm.

“An aerial surveillance flight was arranged by the owners to locate any drifting containers that may pose a hazard to shipping”, said SAMSA, which has requested the public to remain vigilant and report any containers sighted.