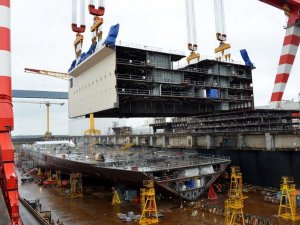 Swiss-based cruise line MSC Cruises and manufacturer of gas and liquid transfer solutions ARTA have agreed to partner for the development of the LNG bunkering system for MSC Cruises ships.

Under the joint program, unveiled at the 2017 LNG Bunkering Summit in Amsterdam, the parties said they would develop a tailor-made LNG bunkering system that takes full account of the cruise industry’s specific needs.

MSC Cruises’ EUR 9 billion (USD 9.7 billion) investment plan for the construction of eleven new next-generation cruise ships in the next ten years will include four LNG-powered cruise ships of the World Class.

To this end, the cruise company has been exploring the market for the most suitable LNG bunkering solution.

“With up to four LNG-powered cruise ships scheduled to join our fleet, we are highly committed to developing the best possible technologies and systems to support the introduction of LNG to cruising,” Yves Bui, MSC Cruises’ LNG Project Director, said.

Bui added that the result of the cooperation with ARTA is a system that features “a newly developed coupling and decoupling mechanism as well as a double-walled hose that will allow us to conduct bunkering operations without disrupting the activities taking place on board the ship.”

In June 2016, MSC Cruises signed a letter of intent with the STX France shipyard for the construction of up to four LNG-powered cruise ships that will feature more than 200,000 gross tonnes.

The four ships, the first one of which will be delivered in 2022, will be based on a new advanced next-generation prototype and will form what will be known as the MSC Cruises’ World Class.

The newly developed LNG bunkering system is planned to be implemented on these World Class ships.

This news is a total 1336 time has been read
Tags: MSC Cruises, ARTA to Develop LNG Bunkering System