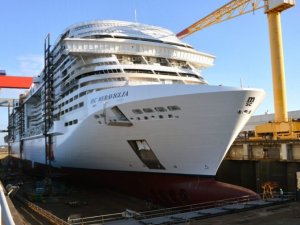 STX France and MSC Cruises have announced they have finalized the contracts for two new 177,000-ton cruise ships for MSC.

The two next-generation ships will be the largest ever built for a European cruise line.

The ships will be known as the “Meraviglia-Plus” class, an evolution of the smaller 167,000 GRT “Meraviglia” class. The first of two “Meraviglia” ships are scheduled to enter into service in June 2017. The will have capacity for 6,300 passengers in 2,450 cabins.

“I am extremely pleased to see us continuing to deliver against our industrial plan with the coming into force of the final contract for the two “Meraviglia-Plus” ships,” said Pierfrancesco Vago, Executive Chairman of MSC Cruises. “I view this as a further reflection of the strength of the relationship in place from day one between MSC Cruises and STX France. It is for this reason that, in addition to having built at STX France all twelve of our existing ships, through 2026 up to eight more are currently planned to be built in France at STX.”

MSC Cruises said the two units finalized this week are part of the company’s €9 billion investment plan for eleven new next-generation cruise ships to coming into service by 2026.

This news is a total 1038 time has been read
Tags: MSC Cruises Finalizes Two-Ship Construction Contract with STX France