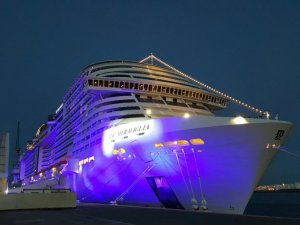 Switzerland-based cruise company MSC Cruises has held a christening ceremony for MSC Meraviglia, the first of the company’s next generation cruise ships.

The christening was held in Le Havre in the evening hours of June 3.

“We have an ambitious vision for the future and MSC Meraviglia marks the start of a new era for our company. For this reason, this evening is an extremely proud moment for all of us at MSC Cruises as we see the first of our next-generation ships being named,” Pierfrancesco Vago, MSC Cruises’ Executive Chairman, said.

Delivered to its owner in late May, MSC Meraviglia is the company’s new flagship and the thirteenth addition to the MSC Cruises’ fleet. What is more, it is the first of eleven new ships due to come into service over the next ten years under the company’s EUR 9 billion investment plan.

On June, the newbuilding will commence its maiden voyage from Le Havre to Genoa. Following this, the ship will start its summer itinerary from Genoa.

As informed, MSC Meraviglia will offer six embarkation ports in the Western Mediterranean including the ports of Genoa, Marseille and Barcelona as well as other destinations including Naples, Messina in Sicily and Valetta in Malta.

This news is a total 881 time has been read
Tags: MSC Cruises Names Its First Next-Generation Cruise Ship