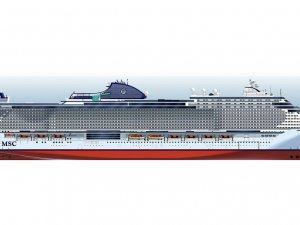 Being called the Seaside EVO ships, the new pair will be a further evolution of the Seaside concept developed by Fincantieri. The concept seeks to create an open ship that brings passengers close to the sea with more open deck space per passenger and a blending of indoor and outdoor areas.

The Seaside EVO design will be 169,380 gross tons versus a completed 153,516 gross tons for the MSC Seaside. Seaside EVO will also be approximately 16 meters longer, measuring 339 meters in length versus 323.3 meters for the first two ships. Overall, the two new ships will feature the same design elements as the MSC Seaside, but passenger capacity will be increased to 5,646 passengers, including a further enlargement of the MSC Yacht Club suite enclave.

Delivery of the first of the two Seaside EVO ships is scheduled for 2021, taking the building slot that had originally been reserved for the third Seaside ship, an option MSC had as part of the first contract. The fourth ship is scheduled to enter service in 2023.

MSC Cruises is continuing a rapid expansion of its overall cruise operations, with the MSC Seaside representing the second new ship the line is introducing in 2017. A sister ship, the MSC Seaview, is due to enter service in June 2018.

“We are expecting the delivery of at least one new ship each year through 2026, with six to have come into service between 2017 and 2020,” said MSC Cruises Executive Chairman Pierfrancesco Vago in today’s press release.  MSC’s current plan calls for a total of 12 new ships to be built over the next nine years with an overall investment of EUR 10.5 billion ($12.5 billion).