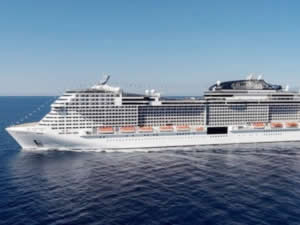 MSC Cruises and Miami-Dade County have signed an agreement for extended preferential berthing rights and a Memorandum of Understanding for the construction of a new Cruise Terminal AAA at PortMiami.

MSC Cruises and Miami-Dade County have signed an agreement for extended preferential berthing rights and a Memorandum of Understanding for the construction of a new Cruise Terminal AAA at PortMiami.

PortMiami is MSC Cruises' exclusive home-port in the U.S. The new agreement extends MSC Cruises' existing Saturday preferential berthing rights also to Sundays. Additionally, the new terminal - which is projected to be completed by October 2022 — will be able to accommodate MSC Cruises' next-generation cruise ships carrying up to 7,000 guests.

Currently the MSC Seaside, which debuted only a few months ago in late 2017, sails year around from Miami to the Caribbean from the recently completed Terminal F. MSC Divina
also sails seasonally to the Caribbean from October through March, and MSC Armonia
will join MSC Cruises' North American-based fleet beginning year-round cruises to Havana, Cuba in December 2018. In addition, as of November 2019, MSC Meraviglia, the company's largest ship at 171,598 GRT with the capacity to carry 5,714 cruise guests (4,488 at double occupancy), will join the other three ships at PortMiami.

Pierfrancesco Vago, Executive Chairman of MSC Cruises, said: "The new agreement and expanded partnership with PortMiami and Miami-Dade County is another key step forward in the business growth of MSC Cruises, as we continue to strengthen our global footprint, with a strategic focus on North America."

New Terminal for NCL In April, Norwegian Cruise Line (NCL) and Miami-Dade County agreed to amend and restate a cruise terminal agreement incorporating the construction of a new Cruise Terminal B at PortMiami.

The new agreement guarantees the county a minimum of 1.3 million Norwegian Cruise Line (Norwegian) passenger moves annually, solidifying Miami as its exclusive homeport in South Florida.  This Minimum Annual Guarantee is expected to generate approximately $24 million in gross revenues starting Fiscal Year 2018, with an increase of three percent annually throughout the life of the agreement.

The new cruise terminal will be able to accommodate vessels carrying 5,000 passengers. Construction is set to be completed in the fall of 2019 on schedule to receive the Norwegian Encore, the newest ship of the Breakaway Plus class - the most successful class in NCL history.

Last year PortMiami served more than 5.3 million travelers, more cruise passengers than any other port in the world.

This news is a total 714 time has been read
Tags: MSC Cruises Plans New Cruise Terminal At PortMiami