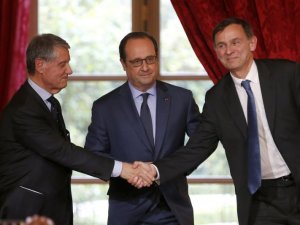 The announcement was made as the company, the largest privately-owned cruise line in the world, signed a letter of intent (LOI) for the construction of the ships with STX France at the company’s shipyard in Saint-Nazaire, France.

The four ships provided under the LOI include two firm orders and two options with delivery planned in 2022, 2024, 2025 and 2026. MSC Cruises confirmed that the new order would represent a nearly $4.5 billion investment, which would bring the company’s 10-year investment plan to an “unprecedented” $10.2 billion and eleven next-generation newbuilds by 2026.

The vessel’s, to be known as the “World Class”, will be based on a new next-generation LNG-powered prototype featuring a GRT in excess of 200,000 tonnes, more than 2,700 staterooms and approximately 5,400 lower berths occupancy, making them the biggest LNG-powered cruise ships planned to date and the most environmentally friendly.

A ceremony for the signing of the letter of intent was held at the Élysée Palace in France and attended by French President Francois Hollande François Hollande, as well as MSC Group’s Founder and Executive Chairman, Gianluigi Aponte, and STX France’s CEO Laurent Castaing.

“Today’s announcement is further proof, if needed, of our view that this industry presents significant opportunities for additional growth going forward for both our brand and product, as well as of our firm commitment to be best-positioned to capture them to the fullest,” said Pierfrancesco Vago, MSC Cruises Executive Chairman. “For this reason, our ten-plus year investment plan now encompasses up to eleven new MSC Cruises ships, coming into service between 2017 and 2026. It is also a reflection of our constant commitment to innovation, as we will partner with STX France to design yet again a completely new prototype – already the sixth in our history.”

Including the four ships announced Wednesday, a total of 20 ships will have been designed and built by STX France in Saint-Nazaire for MSC Cruises.

“We have just signed an unprecedented agreement with MSC Cruises which will give us a vision of our industrial capacity for the next ten years! We have had a good relationship with MSC Cruises for many years now, and this new agreement strengthens this further,” commented Laurent Castaing, STX Frances Chief Executive Officer. “We have already designed four different classes for MSC Cruises – Lirica, Musica, Fantasia and Meraviglia – each with four ships, and now we are working together on this new generation of “World Class” ships.”

MSC Cruises informs that in addition to the four ships just ordered, its current investment plan includes orders with STX France for two Meraviglia and two further Meraviglia-Plus Class ships as well as orders with Fincantieri in Italy for up to three next-generation Seaside Class ships. The plan also includes the $227 million Renaissance Program, in which four ships out of 12 of the company’s fleet were enhanced and enlarged at the Fincantieri shipyards.

MSC Cruises’ announcement follows some big cruise industry news over the weekend as Carnival Corp. finalized its contracts with Italian shipbuilder Fincantieri to build five new cruise ships costing more than $3.4 billion. Delivery of those ships are scheduled for 2019 and 2020.

In June 2015, Carnival became the first to order ocean-going cruise ships powered by liquefied natural gas, the world’s cleanest fossil fuel, with its order for four ships. Those ships will be built by Meyer Werft and split between their yards in Papenburg, Germany and Turku, Finland. Carnival Corporation, the world’s largest cruise company, currently has a total of 16 new ships scheduled to be delivered across several of its portfolio of brands between 2016 and 2020.

This news is a total 8155 time has been read
Tags: MSC Cruises Plans to Build World’s Largest LNG-Powered Cruise Ships for $4.5 Billion