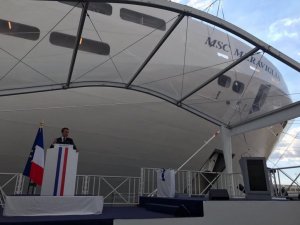 Swiss-based cruise line MSC Cruises has officially taken delivery of MSC Meraviglia – the first of the company’s six new ships due to come into service between 2017 and 2020 – from STX France shipyard in Saint-Nazaire, France.

During the vessel’s flag ceremony held on May 31, MSC Cruises newest flagship received its flag.

“MSC Meraviglia’s coming into service marks a key milestone in the history and future of our company. It represents the first realisation of our long-term vision for further significant growth,” Pierfrancesco Vago, MSC Cruises Executive Chairman, commented.

Following the ship’s christening ceremony, which will take place in Le Havre on June 3, MSC Meraviglia will start its inaugural season sailing the Western Mediterranean.

At 171,598 gross tons and with a guest capacity of 5,714, MSC Meraviglia is both the biggest ship to ever be built by a European ship owner – MSC Cruises – and the biggest to come into service in 2017, the company said.

MSC Meraviglia, the 13th cruise ship to join MSC Cruises’ fleet since its inception in 2003, is 315 meters long and 43 meters wide and is able to travel up to 22.7 knots.

In 2014, MSC Cruises launched an investment plan to support the second phase of its growth through the order of two ships of the Meraviglia generation and two others of the Seaside generation (plus an option for a third). In February 2016, the company confirmed the existing options to build further two Meraviglia Plus ships with a greater capacity.

The orders rose to USD 10 billion when the company signed a letter of intent in April 2016 to build four more cruise ships, each of them to be fueled by liquefied natural gas (LNG).

Under MSC Cruises’ investment plan, four of the six vessels will be built by STX France. The company estimates that its total investment at STX France from 2003 to 2020 will amount to over EUR 7 billion.

In December 2016, MSC Cruises held a steel cutting ceremony for MSC Bellissima, the second of the Meraviglia generation of cruise ships, at STX France’s Saint-Nazaire shipyard.

After its christening ceremony, MSC Meraviglia will begin its first sailing along the Atlantic coast, calling at Vigo (Spain), Lisbon (Portugal), all the way to the Mediterranean, calling in Barcelona (Spain), Marseille (France) and eventually Genoa (Italy). It will commence the first regular 7-night itinerary on June 11, sailing from Genoa on to Naples (Italy), Messina (Italy), Valletta (Malta), Barcelona, Marseille and back to Genoa on June 18.

This news is a total 1095 time has been read
Tags: MSC Cruises Takes Delivery of 1st Meraviglia Class Cruise Ship