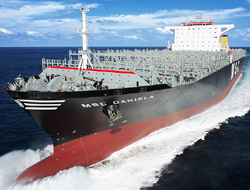 The biggest containership ever classed by Germanischer Lloyd (GL) is delivered in Geoje, Korea.

The biggest containership ever classed by Germanischer Lloyd (GL) is delivered in Geoje, Korea.

The biggest containership ever classed by Germanischer Lloyd (GL) was delivered in mid-December at Samsung Heavy Industry Shipyard in Geoje, Korea. The newbuilding named MSC Daniela has a capacity of 13,800 TEU, a length of 366 metres and a width of 51,2 metres.

MSC Daniela is exceptional not only in terms of size, but also in its design aspects. To meet SOLAS requirements for bridge visibility on the large containership, the design includes the separation of deckhouse and engine room. The arrangement of the deckhouse in the forward part of the ship permits an increase in container capacity and a reduction in ballast water. In addition, the international regulations on the protection of fuel tanks are being fulfilled, since they are located in the protected area below the deckhouse. Also, reduced bending as well as increased stiffness of the hull had been realized in the design. The use of high tensile steels (HTS) was a prerequisite for building the megaboxer.

Due to HT steel the plate thickness had been reduced to allow lightweight and strong ship construction. This was necessary to keep the plate and stiffener dimensions at an acceptable level.

Germanischer Lloyd is represented in Korea with Stations in Busan, Ulsan, Changwon, Daegu, Mokpo, Seoul and on Geoje Island, some of them with associated Site Offices. More than 200 people are employed by Germanischer Lloyd in Korea, including surveyors and plan approval members. The focus lies on newbuilding classification.

In 2007, 12.8 Million GT were delivered with GL class from Korean shipyards. This makes Korea the country with the largest number of GL classed deliveries in the past year.

This news is a total 996 time has been read