MSC, Maersk Partner Up with SM Line on Transpacific Route 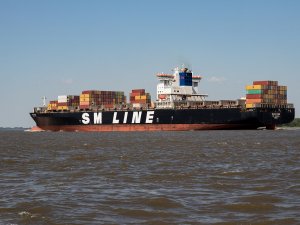 Shipping giants Maersk and Mediterranean Shipping Company (MSC), which together form the 2M Alliance, have found a new South Korean partner on the Transpacific trade as their cooperation with Hyundai Merchant Marine (HMM) expires.

As informed, the 2M carriers entered into a new cooperation agreement with SM Line, beginning on April 1, 2020.

According to MSC, the deal ensures the 2M partners “will provide continuity of services between Asia and the West Coast of North America, with improved services to the Pacific North West”.

Specifically, the new agreement with SM Line is separate from the 2M vessel sharing agreement between MSC and Maersk, and the services of 2M and SM Line will complement each other. The cooperation includes a combination of slot exchanges and slot purchases among the three parties – MSC, Maersk and SM Line – and is subject to regulatory approval.

“With the new agreement, MSC will be in a strong position to continue to offer six weekly services between Asia and the West Coasts of the US and Canada,” MSC said.

MSC added that its existing services to the US East Coast and Gulf remain unchanged and that the agreement between 2M and ZIM in the Pacific North West region also remains in full effect.

The move comes as HMM exits the three-year cooperation deal it had with the 2M carriers since March 2017. The company is joining THE Alliance and its counterparts Hapag-Lloyd, Ocean Network Express (ONE) and Yang Ming on April 1, 2020.

This news is a total 568 time has been read
Tags: 2M Alliance, Maersk, MSC, SM Line.