MSC may change into Italian flag 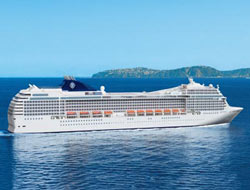 MSC Cruises has confirmed it is considering reflagging from Panama to Italy.

MSC Cruises has confirmed it is considering reflagging from Panama to Italy.

MSC Cruises has confirmed it is considering reflagging from Panama to Italy, as the Naples-based cruise company suggested it may have recaptured some ground this summer.

MSC"s Panamanian registration has always appeared somewhat at odds with its very Italian self-image. As president Domenico Pellegrino describes it, however, the shift owes more to the growing fiscal attractiveness of the Italian flag than any question of identity.

Earlier this week, chief executive Pierfrancesco Vago cited the Italian tonnage tax as well as tax credits for local workers, for the decision to change flags. Given the strong Italian complement on its ten cruise ships, he said, it could save the company tens of millions of euros yearly.

Though there were concerns about the government"s ability willingness to bankroll the shift, Mr Vago said he was hopeful it might go ahead as early as the autumn after what he termed very positive discussions with finance minister Giulio Tremonti and tourism undersecretary Michela Brambilla.

Mr Pellegrino said the company was ?very satisfied? with its summer cruise season. That is despite the ?much higher percentage of late bookings this year than for the last three years?, he conceded.

At the same time, he said those bookings did come. He also credited economies of scale at MSC as the number of vessels in the fleet rose to ten, and the industry"s ability to offer good value for money compared with land-based holidays, for its ability to withstand the crisis.

With the new flagship MSC Splendida, weighing in at 138,000 gt and with capacity for 4,000 guests, also joining the fleet in July, MSC was able to boost passenger numbers by around 20%, compared with an expected 18.6%.

Mr Pellegrino added that profits also rose, though at a slower pace as the company priced aggressively to fill its ships.

Looking forward, he said the company would continue to focus on the Mediterranean, where both the newly launched MSC Splendida and the MSC Fantasia, its sister ship, would be based this winter.

Indeed, capacity on the Mediterranean would be 22% up this winter compared with last year, and he did not exclude further repositioning to its ?home? sea.

The company had also beefed up its presence in both South America and the Indian Ocean, while taking active steps to slow its growth in the US and the Caribbean. As Mr Pellegrino noted, the dollar area simply does not supply the profitability to warrant further investment at this time.

This news is a total 3765 time has been read