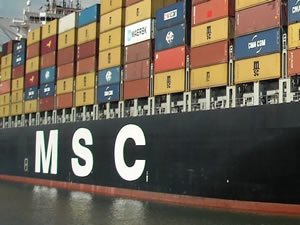 Swiss-headquartered container line Mediterranean Shipping Co (MSC) is set to increase its owned fleet by six according to broking reports.

Clarksons, Allied and data firm VesselsValue are all reporting that MSC has bought six post-panamax boxships controlled by Germany’s Zeaborn in an en bloc deal worth around $158m.

All of the vessels, with the exception of ER Tianping, are already on charter to MSC according to Alphaliner.

Splash has reached out to MSC to verify the reports, which if confirmed will see MSC’s owned fleet reach 200 ships according to VesselsValue data.

This news is a total 4137 time has been read
Tags: Clarksons , deha24 , MSC , VesselsValue , boxships , MSC according , Mediterranean Shipping Co