MSC NAPOLI to be beached again 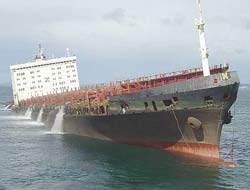 Cracks in hull mean she cannot be towed and will be beached in shallow waters.

Cracks in hull mean she cannot be towed and will be beached in shallow waters.

In a press release issued today, the MCA announced that the Secretary of States Representative for Maritime Salvage and Intervention, Robin Middleton working with the MCA, has taken the decision today to re-beach the container ship MSC NAPOLI at high tide this afternoon (Thursday, 12th July 2007)

The ship was successfully floated on Monday 9th July in a massive operation. It was hoped she could then be towed for repairs if her hull was found to be in a sound condition.

"My decision to re-beach the MSC Napoli was taken following the re-floating of the vessel earlier this week which highlighted the fact that the wreck is in a worse state of deterioration than previously thought, with the crack of the hull being some 3m wide in places."

He said that on the basis of these findings the ship was incapable of being towed.

The vessel will be beached in shallower waters north of where she was originally sitting.

This news is a total 1589 time has been read