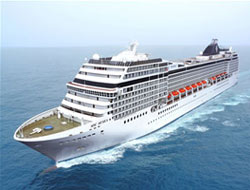 The mega-ship was built in 2007 and has a 3,000-passenger capacity. The MSC Orchestra, the largest among vessels with regular tours to ?stanbul, will visit ?stanbul once every week for 21 weeks and travel between Italy, Croatia, Greece and Turkey.
MSC Cruises added Turkey to its destinations three years ago at the initiative of Arkas Holding -- a well-known sea transportation group in Turkey. The company was pleased with the interest from Turkish tourists and wanted to increase the number further. Weekly passengers boarding with MSC Cruises from Turkey were around 80 on average last year, and this year"s average weekly passengers seem to be at around the 120 mark, according to early reservation numbers.

The MSC Orchestra is nothing less than a hotel and serves its passengers with 18 decks, five restaurants, meeting rooms, a three-floor theater with a 1,250 audience capacity, duty-free shops, a fitness center, a health and spa center, mini-golf and tennis courts.

The cruise with the MSC Orchestra begins in Venice and moves on to Bari in Italy and Katakolon in Greece, docking in Turkey at ?zmir and ?stanbul. The mega-ship then heads back to Venice, calling in at Dubrovnik in Croatia on the way.

Despite cruise-tourism being a recent phenomenon for Turks, approximately 15 million tourists travel with the cruisers around the world. Arkas Holding and MSC Cruises want to make cruises an alternative tourism choice.

MSC Cruises is Italy"s largest luxury cruise line. Established in 1987 from the legacy of the prestigious cruise company STARLAURO SpA, it was renamed in 1995, the year in which Mediterranean Shipping Cruises was officially launched. In 1995, it began offering cruises on board MSC Rhapsody, MSC Monterey and MSC Symphony. Today the MSC Cruise fleet consists of nine stylish ships: MSC Sinfonia, MSC Opera, MSC Lirica, MSC Armonia, MSC Melody, MSC Rhapsody, MSC Monterey, MSC Musica and MSC Orchestra. This will increase to 10 by 2008, with the launch of MSC Poesia. The building of two additional state-of-the-art ships, MSC Fantasia in 2008 and MSC Serenata in 2009, has also been confirmed. These will be the largest ever built by a European ship-owner and will bring the fleet to a total of 12 ships by 2009.

This news is a total 9541 time has been read