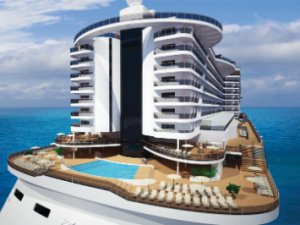 MSC Cruises has revealed that the first of its next generation “Seaside” class of ships will be named MSC Seaside and sail year-round from Miami to the Caribbean.

Following the first ship’s delivery from the shipyard, MSC Seaside will make her way to Miami for MSC Cruises’ first ever christening ceremony in the US to take place in late 2017.

With a gross tonnage of 154,000 tons and the ability to accommodate up to 4,140 guests at double occupancy, MSC Seaside will be the largest cruise ship ever built by Fincantieri shipyards.

“The Seaside class of ships is part of MSC Cruises’ USD 5.3 billion fleet expansion plan that will allow the company to double its capacity by 2022,” said Gianni Onorato, CEO of MSC Cruises.

”Since bringing MSC Divina to Miami in November 2013, we’ve seen significant demand from consumers in the product, excellent support from our travel agent partners and the growing need for additional MSC Cruises’ ships in the market.”

In addition, MSC Cruises said that its Miami-based cruise operations will benefit from a newly renovated and expanded dedicated berth and terminal at Port Miami as the cruise operator tries to further strengthen its foothold in the North American market.

MSC Cruises ordered two ”Seaside” class ships from Italy’s Fincantieri in 2014, with an option to build one more. MSC Seaside has a planned delivery for November 2017 and the second ship in the class will be delivered May 2018.

This news is a total 5018 time has been read