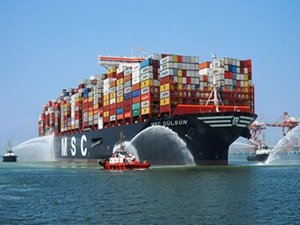 Maersk, the world’s largest containerline for the past quarter century, could soon lose its top spot on the global liner rankings list to its alliance partner, MSC.

MSC has been very active in recent weeks in the secondhand tonnage market, and is being widely tipped to be on the cusp of a major order for a 23,000 teu class series.

Analysts at Copenhagen-based Sea-Intelligence suggested in a report out on Sunday that MSC might soon overtake Maersk as the world’s largest carrier. Presently, Maersk is 6% larger than MSC, and with the known orderbooks this will gradually decline to 4%, according to Sea-Intelligence, while Alphaliner data (see below) shows that in terms of global market share there is now just a 0.9% difference between the two companies, both part of the 2M alliance.

“In absolute terms, it also means that if MSC goes ahead and orders just a single new series of ultra-large vessels for the Asia-Europe trade, and Maersk continues their current strategy of not ordering more large tonnage, then we will see MSC overtake Maersk on fleet size,” Sea-Intelligence noted.

Maersk top management have repeatedly stressed this year the Danish line is not in the market for newbuilds any time soon.

Sea-Intelligence said that Maersk is pursuing a strategy focused on profitability rather than size. “But ‘losing’ the #1 ranking spot, which the carrier has had for a quarter of a century, would still likely have some emotional impact in Copenhagen,” the analysts observed.

MSC became the world’s second largest carrier in 2004, and since then, it and Maersk have continued to top the global ranking table.

Over the past few weeks MSC has been extremely active adding secondhand tonnage to its fleet, most of which was previously on charter to the line

If all of the deals are confirmed, MSC’s owned fleet will reach 204 ships.

This news is a total 2623 time has been read