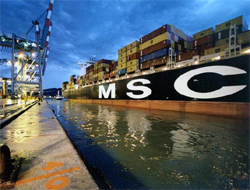 An aggressive scrapping campaign by Mediterranean Shipping Co, the world"s second-largest container line, has left none of its fleet of over 400 vessels idle.

Liner shipping consultancy Alphaliner contrasted MSC"s position with that of Malaysian carrier MISC, which has the highest percentage of idle ships for any of the top 24 container lines.

CSCL, the eighth-largest liner company, has 96,000 teu of its total operated fleet in lay-up.

MSC topped the demolition list amid unprecedented scrapping levels in 2009.

There have been 148 containerships exceeding 275,000 teu sold for scrap and destined for breakers" yards in China, Pakistan, Bangladesh and India, Alphaliner"s weekly report said.

The number of cellular containerships sold for demolition peaked in July to nearly exceed 60,000 teu.

The tally already surpasses many scrapping forecasts for the whole of 2009, provided months ago by industry experts.

After high rates of scrapping in the first half of this year, experts predicted amounts of between 200,000 teu in 2009 and 300,000 teu would be scrapped, double the average scrapping rate of previous years.

MSC has sent 20 of its own ships to the breakers in 2009, including four which were less than 20 years old. Another 12 have come off charter from the container line and were then sold for demolition.

The privately held company has an owned fleet of 751,000 teu and chartered-in fleet of 767,000 teu, according to the Containerisation International database.

After selling and scrapping surplus ships, none operated by MSC appear to be idle, according to the Lloyd"s Marine Intelligence Unit list of inactive vessels.

Meanwhile, the 12 containerships MISC has idle include one of nearly 8,000 teu capacity, the Bunga Seroja Satu.

Mitsui OSK Lines scrapped 11 owned vessels. That has reduced its idle capacity from 17% in May, to 8% this month.

The crisis engulfing the container sector, which is expected to see top lines collectively lose as much as $50bn in 2009, has yet to diminish, with the number of ships in lay-up climbing.

10.4%, or 1.3m teu of the total cellular fleet was now idle, totalling 538 surplus units. Of these, 183 ships were controlled by carriers and 355 owned by non-operating owners.

This news is a total 6947 time has been read