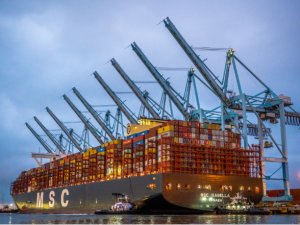 One of the largest ships in the world, the MSC Isabella is part of a new class of 23,000+ TEUs sustainable containerships recently added to the MSC global shipping network. MSC Isabella’s arrival in Los Angeles marks its first time calling at a North American container port.

The large-class vessel arrived at APMT on June 12 and departed on June 19. During the ship’s call, the ILWU operated nine ship-to-shore cranes to execute the record-setting feat.

Named after the eldest daughter of MSC USA President & CEO Fabio Santucci, it belongs to the series of the most energy-efficient ships in MSC’s fleet of container vessels, with the lowest carbon footprint per container carried by design.

A combination of the latest green technologies and greater economies of scale have helped reduce energy requirements over time. For example, the optimised shape of the ship’s bulbous bow and rudder bulb lower resistance while sailing, further enhancing energy efficiency.

MSC Isabella is fitted with an IMO-approved hybrid exhaust gas cleaning system and has the option of switching to low-sulphur fuel or to be adapted for liquefied natural gas (LNG) use in the future.

Built at the Daewoo Shipbuilding & Marine Engineering (DSME) shipyard in South Korea, MSC Isabella was delivered to the Swiss container shipping major in August 2019. In November that year, the newbuilding made its maiden call at the Port of Singapore as the biggest containership to call at this important transshipment hub.

This news is a total 1886 time has been read
Tags: containership , MSC Isabella , Port of Los Angeles