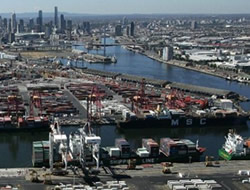 The Maritime Union of Australia passes on with great sadness the news that an MUA member has been crushed to death on board a ship at the Toll Shipping facility in Port Melbourne.

The deceased Anthony Attard was helping load cargo onto the Tasmanian at about 1.45 PM on Tuesday when the incident occurred. Ambulance Victoria said they treated the man at the scene, but he could not be saved.

MUA National Secretary Paddy Crumlin said: “The MUA, its officials, staff and members express our deepest condolences to the family and friends of Mr Attard.  Anthony was well liked by all and was a proud and staunch member of the MUA. Anthony was a delegate and a representative on the EBA committee in the workplace. He was a family man and comrade to all. The MUA has long campaigned for better safety and now demands that this crisis in waterfront safety be addressed by regulation. Safety must be mandatory and it must be law”

Mr. Attard’s brother and best friend were with him when he died. He is survived by his wife and three children.

This news is a total 1913 time has been read