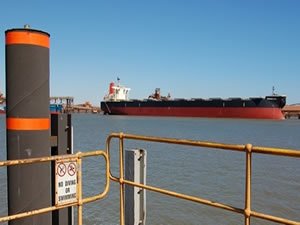 The Maritime Union of Australia has a novel proposal for solving a crew change dilemma: replace the foreign crew with local Australian seafarers.

The Maritime Union of Australia has a novel proposal for solving a crew change dilemma: replace the foreign crew with local Australian seafarers.

The MUA's proposal is a response to the situation aboard the bulker Patricia Oldendorff, which is currently anchored at Port Hedland. 17 out of her 21 crewmembers have tested positive for COVID-19, including 10 who are now isolated in hotel lodging on shore. Seven remain on the ship, along with two uninfected seafarers, and Western Australia Deputy Premier Roger Cook says that the state "will continue to monitor their health while they stay on the vessel."

In addition to civilian police and security guards, Australian military personnel have been assigned to guard the hotel in Port Hedland where 10 positive crewmembers are in isolation.

Since the vessel cannot sail with nine crewmembers, the vessel is at anchor pending a resolution. The Maritime Union of Australia (MUA) has proposed an unusual option: decontaminating the vessel and arranging for local, Australian seafarers to crew it on its next voyage.

“The wellbeing of seafarers is just as important as the people of Port Hedland in Western Australia . . . The MUA is presenting the government with a solution to keep these people well," said Chris Cain, MUA's national president and state secretary of its Western Australia branch. “The simple solution is to move the infected crew into quarantine, provide them with the necessary medical care, carry out a full clean and crew the vessel with local seafarers so we can immediately continue the export of Western Australia’s resources, an industry so critical to our nation’s economy during these troubling times.”

The case of the Patricia Oldendorff has raised questions in Australia about the rigor of current testing and quarantine measures for foreign seafarers. ITF national coordinator Dean Summers called for Western Australian mining interests to fund a new quarantine hotel in Port Hedland for arriving mariners, and he advocated the use of "green lane" end-to-end quarantine procedures for crew change.

This news is a total 2141 time has been read
Tags: MUA: Use Local Seafarers for Crew Change