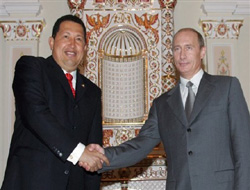 Russia and Venezuelan officials on Friday signed agreements meant to bolster cooperation in the oil and gas industry, playing up energy ties between two nations trying to decrease U.S. influence around the world.

Russia and Venezuelan officials on Friday signed agreements meant to bolster cooperation in the oil and gas industry, playing up energy ties between two nations trying to decrease U.S. influence around the world.

Venezuelan President Hugo Chavez and Russian President Dmitry Medvedev watched the signing of deals between their energy ministries and state energy companies in the southern city of Orenburg. Chavez was on his second trip to Russia in just over two months, while Moscow's relations with Washington and the West have soured since Russia's war with U.S. ally Georgia.

The United States and European Union have denounced Russia's invasion of Georgia, which followed a Georgian offensive targeting the separatist South Ossetia region, and have urged Moscow to rescind its recognition of South Ossetia and breakaway Abkhazia as independent nations.

Though Chavez praised Moscow's actions, Venezuela has stopped short of recognizing the two regions' independence claims. Only Nicaragua has done so.

Medvedev also thanked Venezuela on Friday for hosting the crews of two Russian strategic bombers dispatched there this month, and said the fact that a Russian naval squadron was on its way to Venezuela demonstrates the "strategic framework" of ties between the two countries.

The Western Hemisphere deployments are a pointed Russian response to the U.S. use of military ships to bring aid to Georgia and aspects of what the Kremlin casts as threatening U.S. encroachment near its borders.

Chavez said before the two-day visit to Russia that he and Medvedev would watch a major Russian military exercise in the Orenburg region, but it was unclear whether that would happen.

Since 2005, Russia has signed contracts worth more than $4.4 billion to supply Venezuela with arms including fighter jets, helicopters and 100,000 Kalashnikov assault rifles.

The Kremlin said Thursday that Russia is granting Venezuela a $1 billion credit for the purchase of Russian weaponry, and the state-run news agency RIA-Novosti quoted the director of the state holding Russian Technologies, Sergei Chemezov, as saying Russia and Venezuela are in talks on the possible supply of Russian anti-aircraft systems and armor including armored personnel carriers.

The arms purchases have sparked concern in the U.S. and among some neighbors of Venezuela, such as Colombia, which has accused Venezuelan officials of supporting leftist insurgents.

But Friday's talks focused on energy cooperation. The CEO of Russia's state gas monopoly OAO Gazprom and the president of state energy company Petroleos de Venezuela SA, or PDVSA, signed a memorandum of understanding that Gazprom said allowed for greater cooperation between the companies.

The nations' energy ministers signed a separate memorandum calling for the establishment of a body that would oversee broader cooperation in oil and gas between the energy-rich nations.

He said agreement to create a consortium linking PDVSA with Russia's top oil and gas companies was in the works and could be signed in the coming months, with Gazprom likely leading the Russian side. Chavez also had suggested such a deal would be signed during his visit.

Industry experts were skeptical about the significance of the planned consortium. Chirvani Abdoullaev, chief oil and gas analyst at Russia's Alfa Bank, said it would make little sense commercially and that the countries lack the resources and know-how to bid for global dominance.

"As for the development of Venezuelan heavy crude oil ? none of the Russian companies has adequate technologies to offer," he said. "Why would you go to Venezuela instead of developing your own industry to the world level? We should focus on the tasks we have down here."

This news is a total 551 time has been read