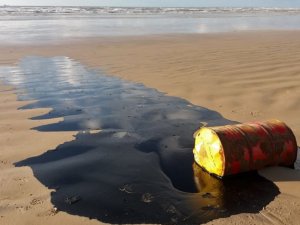 RIO DE JANEIRO — A mysterious oil spill that has polluted shores along a vast area of Brazil’s northeast may have resulted from unspecified criminal activity, and a foreign country could be responsible, President Jair Bolsonaro said Tuesday.

An estimated 100 tons of crude has drifted toward land since early September, polluting some of the country’s most pristine beaches and forcing Brazilian officials to grapple with yet another environmental crisis. The government has already come under close scrutiny, and heavy criticism, after an unusually intense season of forest fires in the Amazon.

Now, oil has been spotted on at least 132 beaches affecting 61 municipalities in nine states, the country’s Environment Ministry said.

Officials have said the state oil company, Petrobras, is not responsible for the spill and that the crude is neither produced in nor exported to Brazil.

Mr. Bolsonaro told reporters on Tuesday that the government had a theory of what led to the spill, adding that a country is on “the radar.” He declined to elaborate, saying: “I can’t accuse a country. If it turns out it’s not that country, I don’t want to create problems with other countries.”

Ricardo Salles, the minister of the environment, flew over part of the affected area on Sunday and said the government was taking “urgent measures to address pollution.”

The spill prompted the state of Sergipe to declare an emergency last week and officials there have warned residents to stop going to certain beaches. The crude has also set off concern about wildlife. Biologists have treated several turtles that have washed ashore covered in crude, but some have died.

The spill comes as Mr. Bolsonaro’s government has come under withering criticism from abroad for weakening environmental policies and agencies while taking steps to open up protected lands in the Amazon to industries.

In early September, environmental agencies in Brazil began noticing crude oil washing up on more than 100 beaches in nine northeastern states, from Maranhao in the north down to Bahia. Environment Minister Ricardo Salles announced this week that more than 100 tons of oil have been collected from along the 3,000-kilometer (1,860-mile) coastline in the last month. Its origins remain unknown.

On October 8, President Jair Bolsonaro said the mysterious oil slicks were likely the result of a criminal act. Earlier speculation had suggested a possible shipwreck or offshore oil platform accident. "We have on our radar screen a country that could be the origin of the oil," Bolsonaro said, though he declined to give any names while the investigation was still underway.

Not from us: Petrobras

Brazil has extensive offshore oil exploration activity, but state-run oil company Petroleo Brasileiro (Petrobras) has said molecular tests on samples showed they weren't compatible with the oils produced and sold by the company. According to media reports, the source of the spill may be oil platforms off Venezuela, but there have been no reported issues from that region.

Petrobras has said the company's environmental crews have worked on beach cleanup operations in eight states, at the request of environmental protection agency Ibama. The agency has said oil-coated birds and sea turtles have been washing up along the shore and are being treated. Baby turtle hatchlings, just now emerging from their shells, are also under threat.

Federal police, the Justice Ministry and the Brazilian navy have joined the investigation into the source of the spill. A shipwreck or other accident has been ruled out, but some experts believe the source may be an oil tanker that cleaned its tanks on the busy route between the southern Caribbean and Asia. The state of Sergipe, which relies heavily on tourism, has been especially hard hit.

The spilled crude oil has forced fishers and beachgoers to stay away from the contaminated areas. Brazil's resorts and beaches are world-renowned and attract millions of locals and foreigners every year, especially from Spain and Portugal. Locals have said it's the worst spill in decades. Major cities along the affected coast include Sao Luis, Fortaleza, Recife (above) and Salvador.

This news is a total 567 time has been read
Tags: Crisis for Brazil