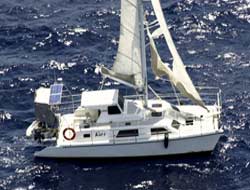 The missing crew of a catamaran found deserted off the Great Barrier Reef — with the sails up, engine running and food on the table — had been planning the “trip of a lifetime,” the daughter of one of the men said Friday.

SYDNEY, Australia (AP) — The missing crew of a catamaran found deserted off the Great Barrier Reef — with the sails up, engine running and food on the table — had been planning the “trip of a lifetime,” the daughter of one of the men said Friday.

Nine planes and two helicopters were flying over an area about 700 nautical miles long, along with four volunteer rescue boats, police and maritime officials said. Marine police were also towing the 40-foot Kaz II back to shore.

A coastal patrol aircraft spotted the vessel on Wednesday; rescue workers who reached the boat early Friday confirmed no one was aboard.

The daughter of one of the missing men said her family was hoping the three were in a dinghy and that the catamaran had drifted away because they forgot to anchor it.

“That’s what we are hoping, that they forgot to anchor it (the catamaran) and it’s drifted off — the three idiots — and (they have) not been able to get back to it,” Keryn Grey, daughter of James Junstead, told the Seven Network television.

But emergency officials said a dinghy was found on board the catamaran, along with its emergency beacon and three life jackets.

The catamaran’s sails were up, but the headsail was “shredded,” according to Warwick Bracken of the Australian Maritime Safety Authority.

There was no indication of any other damage.

The crew — Australians aged 56, 63 and 69 — had set out Sunday, and was planning to sail around northern Australia to Western Australia state, according to Sharon Davidson of the Australian Maritime Safety Authority.

Grey said the trip was supposed to take six to eight weeks.

“They were just going to stop every night, anchor close to shore all the way back around the top and down the coast,” she said. “It was going to be their trip of a lifetime.”

Greg Connor, a forecaster with the Bureau of Meteorology, said the sailors would have faced moderate southeasterly winds of about 22 mph, typical weather for this time of year.

“It would have been excellent sailing conditions,” he said. “There’s no reason to believe this is a weather related incident.”

This news is a total 609 time has been read