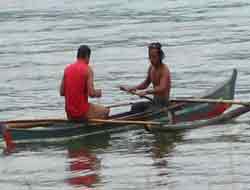 The Philippine Coast Guard (PCG) in Palawan apprehended last Saturday a Vietnamese fishing vessel with ten fishermen on board for illegally encroaching into the country’s territorial waters.

PUERTO PRINCESA CITY: The Philippine Coast Guard (PCG) in Palawan apprehended last Saturday a Vietnamese fishing vessel with ten fishermen on board for illegally encroaching into the country’s territorial waters.

Caligdong said the fishermen were using gillnet in the area during the apprehension.

The Provincial Committee on Illegal Entrants (PCIE), in its inventory of the fishing vessel which arrived at the city’s pier Sunday, found one dry shark and a stingray in their possession.

BFAR provincial fishery officer Panciano Gianan and lawyer Adel Villena filed on Monday a case for violation of Fisheries Administrative Order 200 in relation to Section 87 of Republic Act 8550 (poaching) against the foreign fishermen before the Provincial Prosecutor’s Office.

With the apprehension of the ten Vietnamese nationals, record showed that a total of 34 cases were filed against illegal foreign fishermen from 2002 to present.

This news is a total 780 time has been read