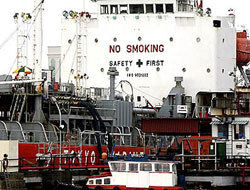 Cheaper freight rates and brimming land storage have boosted the volume of oil products stored in tankers in August despite a narrowing price incentive for companies to hold stocks at sea, industry sources say. ICAP Shipping estimated that by Aug. 21 there were 64 vessels storing 51 million barrels of clean products globally, up from 52 ships holding 39 million barrels at the end of July.

"It is more about the freight market rather than oil market. Tanks on land are full and capacity hit the limit but floating storage seems limitless," an oil broker said.

A sharp fall in industry use of middle distillate fuels, such as gas oil for heating and jet fuel, had been the main reason for stockpiles of oil at sea since late last year.

An oil price structure known as a contango had encouraged companies to store products in tankers anchored at sea this year with a view to selling it for a profit later.

Weak demand had created a steep contango, or premiums on longer-dated contracts to prompt, on ICE gas oil futures.

While oil traders had thought a contango below $6 would trigger an unwinding of floating storage, cheaper freight rates has led to fresh interest to hold stocks at sea.

"It is cheaper to use ships in areas where land stocks are brimming, most particularly in northwest Europe and the Med -- that's mainly gas oil and (other) distillates."

Oil and shipping sources said the bulk of oil products were floating off the coast of northwest Europe and in the Mediterranean, with some stored off Singapore and West Africa.

That is a reversal of what happened briefly in July, when about 6 to 8 ships that had been used to store middle distillates were emptied in Europe due to falling premiums on longer-dated oil contracts, quality issues and the expiry of some ship charters.

The spot rate for a benchmark medium range 47,000 dead weight tonne products tanker on cross Atlantic routes was trading at less than $2,000 a day versus $7,600 a day at the end of July. European rates track those in the Atlantic.

To hire a similar vessel on a time charter for one-year was around $10,500 to $12,000 a day, down from $13,000 a day in July. The volume at sea has already built up to an unprecedented level matching about two thirds of the world's daily oil consumption of 83 million barrels.

This has encouraged some independent traders and banks to even use new very large crude carriers to store middle distillates. "It is just economics pure and simple where you can buy oil Htoday and sell it forward and cash in a premium which gives you a decent return on the transaction including the rental of the vessel," said Ole-Rikard Hammer, senior analyst oil and tankers macro, with Pareto Securities.

This news is a total 1203 time has been read