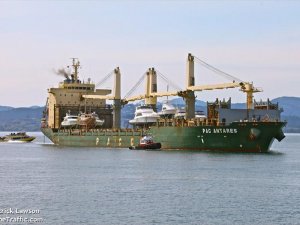 The U.S. Coast Guard and local agencies are responding to reports of an oil spill after a cargo ship struck a pier near mile marker 100 on the lower Mississippi River near New Orleans on Thursday.

The Coast Guard Sector New Orleans received a report at 10:30 a.m. that the Singapore-flagged ship Pac Antares had allided with a pier and was reportedly leaking diesel fuel into the river.

The spill was later estimated to be about 4,200 gallons of fuel oil.

The vessel is currently moored at Nashville Avenue Wharf and the leak has been plugged, the Coast Guard reported.

The Mississippi River is closed to vessel movement from mile marker 91 to mile marker 101.

No injuries have been reported and the cause of the incident is still under investigation.

“First responders continue to work to minimize the environmental impacts and protect the public so the river can be opened to commercial traffic as soon as possible,” said Capt. Wayne Arguin, commander, Sector New Orleans.