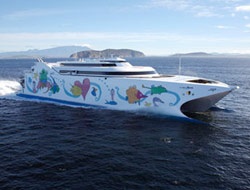 Already the four MAN 20V 28/33D diesel engines, each rated 9,000 kW at 1,000 rpm, have been started for the first time and the vessel is now completing a series of tests in readiness for sea.

Incat says the MAN 20V 28/33D offers a low weight when compared to other engines in its class and that he advantages of engine durability, efficiency, low noise and low maintenance costs make it the engine of choice for Incat vessels, with impressive fuel consumption, burning less kg per cargo tonne per hour than any other high speed catamaran.

The vessel is also environmentally compliant with low NOx of <10 g/kwh.

Engine power is converted to propulsion thrust through a new design of waterjet from Wärtsilä. The new LJX waterjet offers, in comparison with other waterjets available today, a 25 percent reduction in mounting flange diameter, a 10 percent overall weight reduction and a 35 percent increase in cavitation margin. It comes with a 1500 mm diameter impeller and an inboard layout for steering and reversing hydraulics.

A substantial weight saving has been achieved through the use of Centa carbon-fiber shafts. Some 70 percent of weight has been saved compared to that in the use of conventional steel shafts.


Early on Thursday, April 3, Natchan World is scheduled to make its first departure from the wharf at Prince of Wales Bay before passing under Hobart's Tasman Bridge after the city's morning rush hour.

The ship will return to the Incat yard for final adjustments to be made during Friday.

On the morning of Saturday 5 April the Natchan World is planned to depart at around 9 am and will head down the River to Storm Bay for a series of sea trials. It is anticipated the ship will return to the city late that afternoon.

On Sunday 6 April, the ferry is scheduled to sail again for further sea trials, after which it will return to the shipyard in preparation for a naming and completion celebration on Tuesday 8April.

This news is a total 2241 time has been read