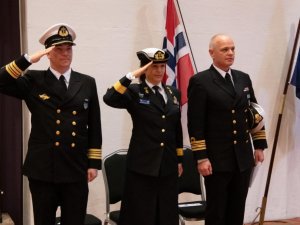 Command of Standing NATO Mine Countermeasures Group One (SNMCMG1) has been transferred to Commander Henning Knudsen-Hauge of the Royal Norwegian Navy.

The ceremony took place at the Akershus Fortress, in Oslo, Norway, on January 15, 2020.

Since the beginning of 2019, SNMCMG1 was led by Royal Danish Navy Commander Peter Krogh.

Over the last twelve months, sixteen ships have contributed to SNMCMG1, patrolling the waters of Northern Europe.

“All nations that contributed ships and personnel to Standing NATO Mine Countermeasures Group One over the last year have shown outstanding dedication to NATO’s mission in the North,” Commodore Jeanette Morang, Commander Surface Forces NATO who presided the ceremony in Oslo, said.

“The achievements over the last year speak highly for Denmark, Commander Peter Krogh and his team, to which we express our greatest appreciation. I look forward to working with Commander Henning Knudsen-Hauge, another highly capable officer that I am sure will continue the outstanding efforts in NATO’s mine countermeasures mission over the next six months.”

This news is a total 1001 time has been read
Tags: NATO, Royal Norwegian Navy, SNMCMG1.