Naval base in Syria anchors Russia to Mediterranean 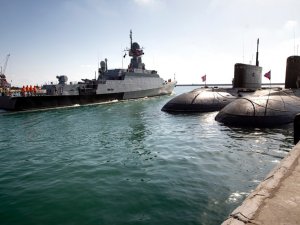 Russia's guided-missile corvette Veliky Ustyug sails from Tartus, Syria,to patrol the Mediterranean Sea on Thursday. Two Russian diesel-electric submarines of the Project 636.3 Varshavyanka class (variants of the Kilo) are seen on the right.

TARTUS, Syria — A Russian submarine has moored at Russia’s base in Syria after a patrol mission while another one is getting ready to sail off after replenishing supplies — the rotation that underlines Moscow’s growing military foothold in the Mediterranean region.

The naval base in Tartus is the only such facility Russia has outside the former Soviet Union. In 2017, Moscow struck a deal with Syrian President Bashar Assad to extend its lease on Tartus for 49 years. The agreement allows Russia to keep up to 11 warships there, including nuclear-powered ones.

Russia has waged a military campaign in Syria since September 2015, allowing Assad's government to reclaim control over most of the country following a devastating civil war.

An air base in the nearby province of Latakia has been the main hub for the Russian military campaign, while the commercial ports in Latakia and Tartus have served as top supply hubs, handling ships with fuel and military equipment in a massive supply effort dubbed the "Syrian Express."

As part of its efforts to restore the Soviet-era practice of keeping warships on a permanent vigil in the Mediterranean, Russia has moved to modernize and expand the naval facility in Tartus. 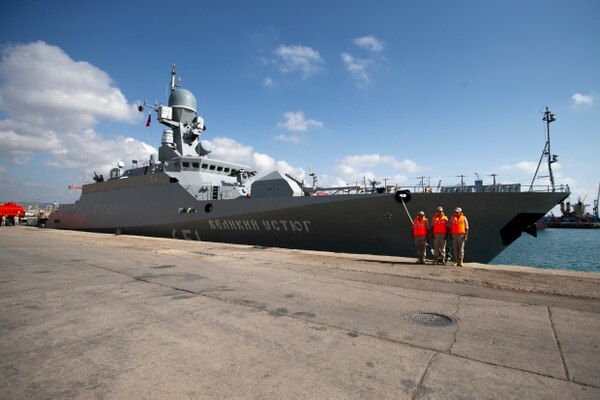 Reporters on a trip to Syria organized by the Russian Defense Ministry could see a missile corvette sailing off on patrol and a group of navy divers practicing at the Tartus harbor.

Tronev added that along with the ships in Tartus, the navy’s force in the eastern Mediterranean currently includes the guided-missile cruiser Marshal Ustinov, which has sailed from its Arctic base of Severomorsk, and the guided-missile frigate Admiral Makarov detached from the Black Sea Fleet.

The Soviet Union maintained a constant navy vigil in the Mediterranean during the Cold War but Russia's presence in the region withered in the years after the 1991 Soviet collapse amid economic woes and military funding shortages.

As part of Russian President Vladimir Putin's efforts to beef up the Russian military amid tensions with the West, the Russian navy in recent years has revived the Soviet-era practice of constantly rotating its warships in the Mediterranean.

Next month, the Russian navy plans to open a maintenance shop in Tartus that will further bolster the base's capability.

"It will make it easier to repair ships and maintain its naval capability in the region," said Yevgeny Gushchin, a navy officer in charge of the shop. "We now have to deliver all spares and repair tools by plane, which slows things down. After the shop's opening we will be able to manufacture them here."

This news is a total 1772 time has been read
Tags: Naval base, patrol the Mediterranean Sea, Russian diesel-electric submarines