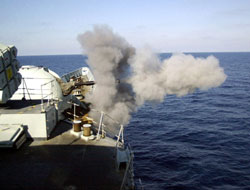 China appears set to send naval vessels to help in the fight against hijackers in the pirate-infested Gulf of Aden.

China appears set to send naval vessels to help in the fight against hijackers in the pirate-infested Gulf of Aden.

China appears set to send naval vessels to help in the fight against hijackers in the pirate-infested Gulf of Aden. A vice foreign minister and a leading naval strategist were quoted in Chinese state media on Wednesday as saying that Beijing is close to mounting a naval mission in the gulf. "China is seriously considering sending naval ships to the Gulf of Aden and waters off the Somali coast for escorting operations in the near future," said the Foreign Ministry official, He Yafei. His remarks came at a ministerial meeting of the United Nations Security Council.

Li Jie, a military strategist and naval expert, told that cooperating with a multinational force operating against East African pirates would be a "very good opportunity" for the Chinese Navy.

"Apart from fighting pirates," he said, "another key goal is to register the presence of the Chinese Navy."

Pirates had seized a Chinese fishing vessel off the coast of Yemen. The report said the boat was believed to have a crew of about 30. At least two other ships have been hijacked this week: a French tugboat and a Turkish cargo ship.

Traditionally concerned with coastal defense, the People's Liberation Army Navy has been undergoing a wide and rapid modernization program, especially in the bolstering of its submarine fleet. A long-range goal of the Chinese expansion has been the development of a blue-water navy capable of extended tours.

%60 of China's imported oil comes from the Middle East

About 60 percent of China's imported oil comes from the Middle East, and the bulk of that passes through the gulf, along with huge shipments of raw materials out of Africa. Last month, two Chinese ships were hijacked there, a fishing trawler and a Hong Kong-flagged cargo ship carrying wheat.

"I would think they would go to protect their own interests -- just for escorting purposes and not for policing," said Jane Chan, an associate research fellow in the Maritime Security Program at Nanyang Technological University in Singapore. "I don't think they're talking about going on the offensive right now so far away."

While China has been "quite wary of putting maritime assets in the region and wary of doing anything out in the open," Chinese diplomats have been active in anti-piracy efforts, according to Arthur Bowring, managing director of the Hong Kong Shipowners Association.

"The Chinese have been working diplomatically with the Yemeni government and coast guard, and their ambassador in Nairobi is very heavily involved," Mr. Bowring said. "They may not seem out in front, but they work extremely hard in the back seat."

To help combat the dramatic rise of increasingly brazen hijackings in the gulf, the European Union deployed its first-ever naval mission this month, a six-ship flotilla. The E.U. operation, code-named Atalanta, joined other navies already patrolling there, including the United States, Russia and India.

"China is usually quite conservative about playing with the big guys or saying they're going to match up with them," said Ms. Chan.

Also this month, the Security Council passed a resolution allowing navies to breach Somalia's 12-mile territorial limit while pursuing suspected pirates. And on Tuesday, the council voted unanimously to permit attacks on pirate bases on the ground as well.

Although pirates use oceangoing "mother ships" to attack merchant vessels deep in international waters, they are resupplied and find safe haven in towns along the lawless coast of Somalia. Many anti-piracy experts have pressed for international strikes against the pirate bases on land.

Ban Ki-moon: Piracy is a symptom of the state of anarchy

"Piracy is a symptom of the state of anarchy which has persisted in that country for over 17 years," said the U.N. secretary general, Ban Ki-moon. "This lawlessness constitutes a serious threat to regional stability and to international peace and security."

The U.S. secretary of state, Condoleezza Rice, helped push through the U.N. resolution, which allows "all necessary measures." "I would not be here seeking authorization to go ashore if the United States government, perhaps most importantly, the president of the United States, were not behind this resolution," she said.

More than 100 vessels have been attacked by pirates in the gulf this year, and 42 have been hijacked. Sixteen are currently being held for ransom, including a fully loaded Saudi supertanker, the Sirius Star, and a Ukrainian ship, the Faina, carrying a load of 32 battle tanks and other heavy weapons. About 250 crew members also are being held on the various hijacked ships.

This news is a total 613 time has been read