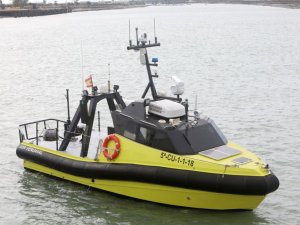 Navantia Sistemas has delivered to the Port Authority of Ceuta the first ship with autonomous capacity in Spain,named“USV Vendaval”The shipbuilding company successfully integrates the systems of the ship 'USV Vendaval' built by the Spanish shipyard Aister

Navantia Sistemas has carried out the installation and integration, in a boat built by the Spanish shipyard Aister, of the propulsion control and a set of sensors required by the client, such as radars, sonars, GPS, inertial navigators, weather station, infrared cameras, stereoscopic cameras, 360º cameras and AIS.

These sensors can be managed remotely from a command and control centre, on land or installed on another ship, as well as manually from the ship's bridge. As for navigation modes, the vessel can be controlled totally autonomously, following a pre-established route, or remotely-controlled from a command and control centre, in both semi-automatic and manned modes. In addition, if the mission needs to be aborted, the system has an automatic return mode. In all automatic modes, the system detects possible collisions and avoids them autonomously.

The missions for which the system has been designed include safety in maritime disasters, elimination of polluting spills for the environment, asset protection, fight against illegal immigration and drug trafficking, surveillance and counterterrorism. The Navantia system can also incorporate deterrents, such as loudspeakers and spotlights, to prevent vessels from entering danger zones for humans, or water cannons to quell fires, and other military applications.

Thanks to its design, the USV product line, developed by Navantia, provides great versatility in both civil and military versions, being able to integrate any type of sensor or actuator necessary to meet customer requirements.

This product line represents for Navantia a field in which to make real applications of innovative developments in some of the new technologies most demanded today, such as data management, artificial intelligence or cybersecurity, all of which are fundamental technologies for the correct functioning of this vessel.