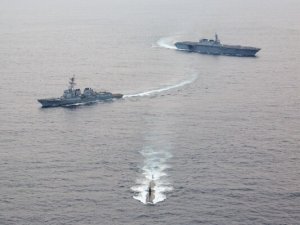 BEIJING — This is a weekly look at recent developments in the South China Sea, where China is pitted against smaller neighbors in multiple territorial disputes over islands, coral reefs and lagoons. The waters are a major shipping route for global commerce and are rich in fish and possible oil and gas reserves.

US NAVY IN JOINT OPERATIONS IN SOUTH CHINA SEA

"Our operations in the Indo-Pacific are focused on maintaining regional stability and security," Rear Adm. George Wikoff, commander of Task Force 70, was quoted as saying in a news release from the Pacific Fleet.

"Our presence reflects our commitment to the values we share with the many partners and allies in the region, and we stand prepared to deter those who challenge these mutual values with the overwhelming force of our combined carrier and amphibious strike groups," Wikoff said.

The Malabar 2019 exercise hosted by Japan brings together China's chief rivals in the region in what Beijing likely views as an attempt to stifle its expanding influence and assertions of its territorial claims.

It is the latest in a series of annual maritime drills started in 1992, with Japan a regular participant since 2015. This year’s exercise, which started late last month, aims to improve inter-operability between Indian, Japanese and U.S. maritime forces and provide an opportunity to conduct engagement highlighting U.S. cooperation with allies and partners in the Indo-Pacific, the 7th Fleet said.

In addition, the Los Angeles-class fast attack submarine Key West joined in the bilateral exercise Pacific Griffin with Singapore’s navy on Sept. 24 to Oct. 10 near Guam.

Japan's 2019 Defense White Paper says China has maintained heavy spending on its armed forces "without transparency," while focusing on its nuclear, missile, naval and air forces.

The annual report released late last month said that in the South China Sea, China is “moving forward with militarization, as well as expanding and intensifying its activities in the maritime and aerial domains by deploying aircraft.”

"China continues unilateral efforts to change the status quo by coercion to create a fait accompli," said the report, reflecting views held by other U.S. treaty allies such as Australia and the Philippines.

The report said that in the East China Sea, where China claims seas and islands controlled by Japan, China's navy and air force have "expanded and intensified their activities in the surrounding sea areas and airspace of Japan, including the area surrounding the Senkaku Islands," known in Chinese as Diaoyu.

China is "likely planning to make such activities routine," while it "continues to improve the quality of its activities, and efforts can be seen to build practical joint operational capabilities."

Tensions over China’s East China Sea claims have flared into anti-Japanese violence in China in recent years, and Beijing has angrily demanded that Japan’s navy steer clear of the South China Sea, something it has refused to do.

Foreign Secretary Teodoro Locsin Jr., who was accompanying Philippine President Rodrigo Duterte on a visit to Russia, issued the normally confidential order on Twitter to officials at the Department of Foreign Affairs.

Relations between the Philippines and China have vastly improved under Duterte, but territorial rifts have remained a thorny issue.

The Philippine military chief and other officials have reported new activities by Chinese coast guard vessels at Second Thomas Shoal, where Filipino marines keep watch on board a long-grounded navy ship.

Locsin tweeted: "Do I have to fly home to file the goddamned diplomatic protest myself? That's the military speaking. Not some friggin' civilian media outlet. File now!!!"

There was no immediate comment from Chinese Embassy officials in Manila. In the past they have claimed Chinese sovereignty over the shoal.

Under Duterte, Chinese and Philippine officials have held talks to avoid dangerous encounters, which have eased but continue to occur from time to time. A Philippine official told The Associated Press that a Philippine resupply vessel was blocked by a Chinese ship at Second Thomas Shoal in May.

This news is a total 241 time has been read
Tags: Navy exercises sprawl across western Pacific, US NAVY IN JOINT OPERATIONS IN SOUTH CHINA SEA, JAPAN, INDIA NAVIES HOLD EXERCISES