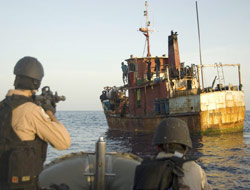 Ships from Combined Task Force (CTF) 151 yesterday prevented a piracy attack in the Gulf of Aden. More than a dozen suspected pirates were captured aboard an apparent "mothership."

Ships from Combined Task Force (CTF) 151 yesterday prevented a piracy attack in the Gulf of Aden. More than a dozen suspected pirates were captured aboard an apparent "mothership."

In the attack, several assault rifle rounds and one rocket propelled grenade round struck M/V Amira, but resulted in little to no damage to the ship. A rope was thrown from the pirates' skiff in an attempt to board but the attempt failed and the pirates abandoned their attack.

Gettysburg and Munmu the Great launched their embarked helicopters which flew immediately to Amira's location.

During its flight, the SH-60B helicopter assigned to Helicopter Anti-submarine Squadron Light (HSL) 46 located a dhow suspected of serving as a pirate "mothership" with approximately 17 people onboard.

All 17 of the passengers were brought on board Gettysburg for further questioning.

"This is another clear example of how coordination between the Combined Maritime Forces resulted in the successful disruption of pirate activity," said Royal Navy Commodore Tim Lowe, Deputy Commander of the Combined Maritime Forces. "It is imperative that all maritime forces continue to synchronize their efforts to deter and disrupt these unlawful and aggressive acts."

This news is a total 2978 time has been read