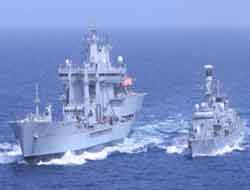 Plymouth based PORTLAND and WAVE RULER to render assistance to the Cayman Islands.

Plymouth based PORTLAND and WAVE RULER to render assistance to the Cayman Islands.

Plymouth based Royal Navy warship HMS Portland and the Royal Fleet Auxiliary tanker Wave Ruler are preparing to render assistance to the Cayman Islands as Hurricane Dean sweeps through the Caribbean.

The hurricane, which has already caused significant damage in Martinique and Jamaica, has now increased in intensity to a Category 4 and is expected to pass the Cayman Islands later today. Both ships are on full alert and are following some 150 miles behind the hurricane in order to be on scene as soon as it is safe for the crew to go ashore.

The ships’ companies have spent the last 48 hours finalising the details of their standing humanitarian disaster relief organisation. Specialist teams include first aid, heavy and light rescue and logistics. Commander Mike Utley, HMS Portland’s Commanding Officer, said: “Our ship’s companies are well placed to deal with such disasters and are ready to offer whatever assistance they can in the form of first aid, provision of food and water and later on help with the regeneration of the islands’ infrastructure”.

The two ships currently form the Atlantic Patrol Task (North), with the aim of providing disaster relief to Caribbean dependent territories during the hurricane season. At other times, the ships conduct Maritime Counter Narcotics operations and wider regional engagements covering the Atlantic and western Pacific.

HMS Portland is one of the Royal Navy’s Duke Class, Type 23 Frigates. Home to 180 men and women, she is well equipped to carry out a broad range of military and humanitarian tasks. As a multi-purpose frigate her weaponry includes a 4.5 inch gun, Harpoon and Seawolf missile systems and she carries the versatile Mark 8 Lynx helicopter. At 133 metres in length and with a displacement of 4,800 tonnes, the frigate is powered by 2 Rolls Royce gas turbine engines, supported by 4 diesel generators.

RFA Wave Ruler is a fast fleet tanker capable of replenishing warships at sea. She is a diesel electric ship - which means she is driven by an electric motor, powered by diesel generators - and takes advantage of the latest propulsion control technology.

RFA Wave Ruler was built by BAE Systems in Glasgow, being launched in 2001 and accepted into service in 2003. She is 196.5 metres long, displaces 31,500 tonnes, has a speed of 18 knots and has a ship’s company of 80 RFA and 22 RN personnel. She has a flight deck and hangar and has also carries a Lynx helicopter.

This news is a total 515 time has been read