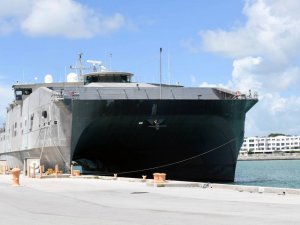 The new vessel, currently under construction at Austal USA in Mobile, Ala., is the fourth ship named in honor of the Rhode Island city which serves as home to several Navy activities, including Naval Station Newport and the Naval War College.

USNS Newport is the 12th and final vessel in the EPF in the series, formerly known as the Joint High Speed Vessel (JHSV).

The 338-foot shallow draft, all aluminum, commercial-based catamarans are designed for High Speed Intra-Theater Surface Lift and serves in a variety of roles for the military branches to include support of overseas contingency operations, conducting humanitarian assistance and disaster relief missions and supporting special operations forces. The vessels have a waterline beam of 93.5 feet, displace approximately 2,362 tons and operate at speeds of approximately 35-plus knots.

In 2008, the Navy awarded Austal USA a $185,433,564 fixed-price incentive contract modification for detail design and construction (DD&C) of one EPF, with options for the construction of up to nine additional ships and associated shore-based spares. A modification for the DD&C of EPF 11 and EPF 12 was awarded to Austal in 2016, bringing the total to 12.

The program initially divided the 10 prospective ships of the EPF class into five ships for assignment to the Army and five ships for the Navy. However, in 2010 both services agreed to transfer the Army’s five ships to the Navy.

The Navy has accepted delivery of nine EPFs with USNS City of Bismarck (T-EPF 9) being the most recent delivery in December 2017. Burlington (EPF 10) is planned for delivery in late 2018.

In addition to the EPF program, Austal is also under contract to build Independence-variant Littoral Combat Ships (LCS) for the U.S. Navy. Six LCS have been delivered while an additional seven are in various stages of construction.