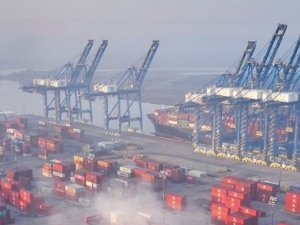 Despite the COVID-19 pandemic, the North Carolina State Ports Authority recorded year-over-year increases in traffic at the ports of Wilmington and Morehead City over the course of the last fiscal year, which ended on June 30.

Most American ports have posted steep declines in traffic since February due to the coronavirus downturn, and that affected North Carolina's ports as well - but the overall annual result was still positive. NC Ports also set itself apart from its peers by setting a new record for its annual earnings.

“Despite the coronavirus pandemic, North Carolina Ports was able to report year-over-year growth in both container and general cargo business, which is a testament to the ongoing hard work of our employees,” said Paul J. Cozza, the head of North Carolina Ports. “We were on pace for a record year in terms of volume before an influx of blank sailings due to COVID-19. Regardless, we are pleased NC Ports was able to push through this uncertainty and record a positive performance in FY20.”

Over the span of the fiscal year, NC Ports completed a number of vital infrastructure improvements to enable more traffic in the years ahead. These included an air draft improvement project that raised the maximum allowable height to 212 feet - enough room to allow 14,000 TEU-plus vessels to call at the port. The four-month project was led by Duke Energy and involved upgrading the transmission towers over the Cape Fear River. Altogether, the improvements raised the electrical transmission lines by a total of 41 feet. “This was a strategic decision to virtually eliminate air draft issues that other ports in the southeast continue to face due to bridge restrictions,” said Cozza in a statement.

NC Ports also opened up a 2,600 foot container berth space at Port of Wilmington - enough space for two ULCVs at a time. It also installed a new reefer container yard and finished the second phase of a turning basin expansion project. With the enlarged basin, the port can now accommodate ULCVs of up to 1,200 feet in length.

Shortly after these improvements were completed, Port of Wilmington welcomed its largest container ship ever, the 13,100 TEU Hyundai Hope. “This is proof positive that we are big ship ready and capable of handling some of the largest container vessels calling East Coast ports today,” said Hans C.E. Bean, NC Ports' chief commercial officer.