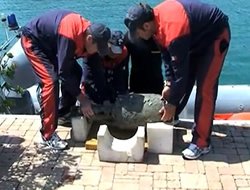 After 2,000 years, the merchant vessels cargo  including 200 jars used to keep grain, wine, oil and pickled fish  is secured.

Hidden beneath the waves of the Mediterranean for around two millennia, a Roman ship has been discovered off the northwestern Italian coast.

Nearly intact, the vessel contains over 200 amphorae - jars used to store food such as grain, wine, oil, and pickled fish, according to Discovery News.

Thousands of years ago, the ship served as a merchant vessel between Spain and Italy.

Merchants were very important for the Romans, whose territory once included much of the Mediterranean and spanned from England in the north to Egypt in the south.

These days, the ship is buried beneath mud on the floor of the sea.

Centro Carabinieri Subacquei
The sunken Roman ship was buried in mud, which helped preserve it.

"Right now the area of the finding has been secured, and no fishing or water traffic is allowed," Lt. Col. Schilardi told Discovery.

Until officials decide what to do with the ship, it will remain where it is, according to Discovery.

This news is a total 1628 time has been read