?nebolu Port has being opened 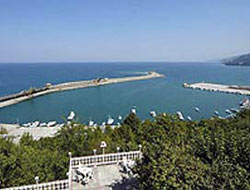 ?nebolu Port Construction which is witness to 3 Ottoman Sultan and 58 Republic Government is still being opened.

?nebolu Port Construction which is witness to 3 Ottoman Sultan and 58 Republic Government is still being opened. The construction that started at the end of 19th century will be completed and opened at 6th of July with a ceremony.

?nebolu Municipality President ?dris Güleç told they were very happy with the completion of the port which has been continuing for 125 years.

?nebolu Port's, which was started building with the allocation provided by Great Sultan Abdülhamid the Second, opening will be done in the mean time Prime Minister Recep Tayyip Erdo?an meet with the public of ?nebolu for the election. ?dris Güleç said that Prime Minister Erdo?an would do the opening by live broadcast.

?nebolu Port which started building with the allocation that wanted from Great Sultan Abdülhamid the Second by Kastamonu Governor of term, has been construction for 125 years. The construction Ottoman started saw lived 3 Sultans term. At the republic term it got bad fame because of not completing by 10 president of republic and 58 governments too.

This news is a total 1033 time has been read