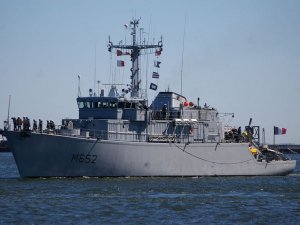 The acquisition of the minehunters will contribute to enhancing the capabilities of the Bulgarian Navy to fulfill fully the obligations to conduct mine operations to ensure the safety of navigation in our maritime space in peacetime, as well as to successfully fulfill the wartime tasks in national and Allied format in NATO and the EU.

The peculiarity of the Tripartite-class minehunter is to have three gas turbines arranged well above the waterline. Although adding weight in the upper part of the ship, this configuration ensures better acoustic discretion during the mine hunting phase. They are equipped with autonomous submarine robots named in the French and Belgian marine "PAP" for "Auto Propelled Fish".

Their fixed self-defense armament is light with only machine guns, and on French ships, a 20 mm gun, but it is possible to add equipment occasionally such as the Milan missile firing station installed on the Crocus in 1988, then on mission in the Persian Gulf.

This news is a total 515 time has been read