New agreement to build a BPC 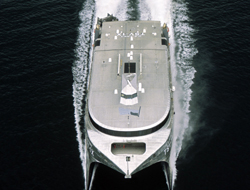 STX Europe has signed a contract to build a third Projection and Command Vessel (BPC) for the French Navy.

STX Europe has signed a contract to build a third Projection and Command Vessel (BPC) for the French Navy.

STX Europe will build the platform and outfit the ship at its yard in Saint-Nazaire, France, and DCNS, its co-contractor, will produce its combat system. STX Europe, in charge of the overall coordination of the project for the industrial part, will build the whole of the propelled platform including the fitting out of equipment onboard.

Once trials are completed, the vessel will move to Toulon where DCNS will manufacture and integrate the combat system, which includes communications, navigation and combat management systems.

Being 199 metres in length, with a displacement of 21,000 tons and a speed of 19 knots, the BPCs are distinguished by their large carrying capacity: 450 troops, 16 heavy-lift helicopters, 2 hovercraft, 4 LCMs (landing craft) or a third of a mechanized regiment (1,000 tons), which they are able to deploy worldwide. They are equipped with electric pod propulsion and their high level of automation enables the size of their crew to be reduced to 160. They also boast an on-board hospital for large-scale humanitarian missions.

STX Europe has already delivered two BPCs in cooperation with DCNS; Mistral and Tonnere were delivered in 2006 and 2007 respectively.

This news is a total 3240 time has been read