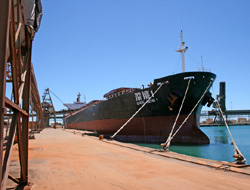 Murchison and Mitsubishi signed a $2.7 billion agreement with the Western Australian government to build an iron ore port and rail project.

Murchison and Mitsubishi signed a $2.7 billion agreement with the Western Australian government to build an iron ore port and rail project.

Murchison Metals Ltd. and Mitsubishi Corp. today signed a A$4 billion ($2.7 billion) agreement with the Western Australian government to build an iron ore port and rail project in the state"s mid-west. The deep-water port, 450 kilometers (280 miles) north of Perth, may make its first shipments from 2013 with construction scheduled to start from 2010, Premier Colin Barnett said today in an e-mailed statement.

?Oakajee is the single most important project for Western Australia"s economic development over the next 50 years,? Barnett said in the statement. Oakajee Port & Rail Pty, a joint venture between Murchison and Mitsubishi, will spend A$160 million on completing a financing study by March 2010, he said.

Perth-based Murchison rose 1.4 percent to 71.5 cents at 1:42 p.m. in Sydney. The company, part-owned by China"s Sinosteel Corp., has gained 13 percent this year and has a market value of A$293 million.

Murchison and Mitsubishi will need to raise about A$3 billion in the next 12 months to fund construction, Oakajee Port & Rail Chief Executive Officer Christopher Eves told reporters at a briefing in Perth.

?We"re confident we"ll raise the funds,? Eves said. ?The financing market we"ll go to in 12 months time will likely be different to the one now.?

The project, which will create 2,000 jobs during construction and employ 400 workers on completion, is dependent on an initial financing study scheduled to be completed by March 31 next year, Barnett said. He didn"t rule out the possibility of the port being used to ship out uranium exports.

Government funding will total A$678 million, to be used to develop a heavy industrial estate, with Barnett saying he"s confident the federal government will contribute half of that.

Thiess Ltd., controlled by Leighton Holdings Ltd., was named the project"s contractor, with Australian Rail Network Ltd. and P&O Automotive and General Stevedoring to operate the rail and port networks.