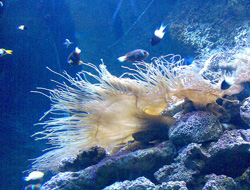 Marine scientists have discovered hundreds of new animal species on reefs in Australian waters, including brilliant soft corals and tiny crustaceans, according to findings released Thursday.

Marine scientists have discovered hundreds of new animal species on reefs in Australian waters, including brilliant soft corals and tiny crustaceans, according to findings released Thursday.

The creatures were found during expeditions run by the Australian chapter of CReefs, a global census of coral reefs that is one of several projects of the Census of Marine Life, an international effort to catalog all life in the oceans.

"People have been working at these places for a long time and still there are literally hundreds and hundreds of new species that no one has ever collected or described," said Julian Caley, a scientist from the Australian Institute of Marine Science who is helping to lead the research.

"So in that sense, it's very significant in that if we don't understand what biodiversity is out there, we don't have much of a chance of protecting it," he said.

Scientists at several Australian museums have begun the complex process of working with the samples for genetic barcoding and taxonomy, the formal system of naming living things. That work is expected to take years, Caley said.

Among the creatures researchers found were about 130 soft corals - also known as octocorals, for the eight tentacles that fringe each polyp - that have never been described in scientific literature, and scores of similarly undescribed crustaceans, including tiny shrimp-like animals with claws longer than their bodies.

The 10-year census, scheduled for final publication in 2010, is supported by governments, divisions of the United Nations and private conservation organizations.

The Australian researchers conducted three expeditions, one each in the waters off the Great Barrier Reef's Lizard and Heron islands, and one in the Ningaloo Reef, on Australia's northwest coast. Thousands of samples were collected during the three-week research trips, which took place between April and September.

Researchers plan to explore the three sites annually for the next six years to learn more about soft corals, which are poorly understood, despite making up a large part of the Great Barrier Reef. Scientists are also looking to catalog how many animal species live on Australia's coral reefs, how many are unique to the reefs and how they respond to human disturbance.

Researchers also pegged 36 plastic house-like structures to the ocean floor in various locations around the three sites. Animals are likely to be attracted to the structures and make them their home. Researchers will go back and study the life inside each house over the next few years. The structures will also be placed in reefs in other parts of the world, providing a standardized method for studying marine life internationally, Caley said.

The project marks the first time any group has made a concerted effort to understand the biodiversity of the Great Barrier Reef, said Ron Johnstone, a marine science professor at the University of Queensland who is familiar with the research.

The scientists' findings could have direct benefits for humans, Johnstone said. Marine life is used in medicines, and the creatures could also provide clues as to how they cope with climate change and pollution - issues people wrangle with as well.

This news is a total 567 time has been read