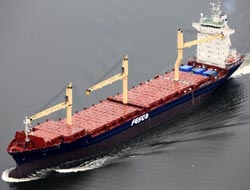 European equities enjoyed a second consecutive week of gains after hope grew that the global economy might be bottoming out.

European equities enjoyed a second consecutive week of gains after hope grew that the global economy might be bottoming out.

European equities enjoyed a second consecutive week of gains after hope grew that the global economy might be bottoming out. Nordic shipping operators soared on Wednesday after improved manufacturing data from China was taken as evidence that demand for commodities in the world's third-largest economy could recover in 2009. Norwegian shipping company Golden Ocean Group jumped 46 per cent over the week to NKr7, and Denmark's Norden rose 33 per cent to DKr247.50.

Two of Scandinavia's largest banks, SEB and Danske Bank , said they would raise new capital to cover losses from bad loans. Until now, Swedbank was the only large bank to have raised a significant amount of extra capital, tapping investors for SKr12bn in November.

Swedish bank SEB rose 28.8 per cent over the week to SKr46, despite announcing the SKr15bn rights issue and saying it would pay no dividend for 2008. Danske Bank, meanwhile, ended the week 11 per cent lower at DKr270.70 after saying it would apply for DKr26bn from the Danish government capital injection scheme.

Swedish bank shares have come under pressure, due in part to their exposure to the Baltic region, which is forecast to suffer a gruelling recession.

At the start of the week, the January European purchasing managers index data provided a slither of good news. Eurozone manufacturing activity shrank at a lower rate than in the previous month, but was still at its second-lowest level in the survey's 12-year history.

Data remained mixed, however, with a fourth consecutive fall in Germany factory orders appearing to have little impact on the European Central Bank's decision to keep its key interest rate unchanged on Thursday.

US investor Warren Buffett injected $2.6bn (?2bn) into Swiss Re after the world's second-largest reinsurer reported a near SFr1bn loss and said it could stage a rights issue for an extra SFr2bn. The company said Mr Buffett would be issued with bonds containing an option to convert into shares at SFr25.

Yesterday shares in Swiss wealth manager Julius Baer plunged 40 per cent after an anonymous letter sent to regulators claimed the bank had suffered a trading scandal was circulated to traders.

Julius Baer said the letter referred to a "minor trading incident" in October, which had been dealt with internally and the Swiss regulator informed. The bank announced full-year results showing a 25 per cent drop in net profit and a 32 per cent rise in withdrawals. Its shares closed 13 per cent down for the week at SFr30.

This news is a total 2910 time has been read