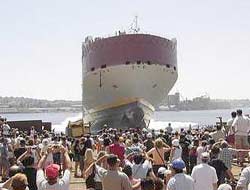 A great number of visitors watched as Grimaldi's latest car carrier, the GRANDE COLONIA, was launched at hte Uljanik shipyard at 2pm on Saturday (21st July 2007)

And as GRANDE COLONIA takes to the water, another one has her keel laid.

A great number of visitors watched as Grimaldi's latest car carrier, the GRANDE COLONIA, was launched at hte Uljanik shipyard at 2pm on Saturday (21st July 2007)

The 12,500 dwt ship can carry 4350 cars and is the elventh in the series for the Italian shipping firm.

In hot weather the ship was launched by Ms Maria Rosalia Marmo, wife of Mr Pierluigi Marmo – the representative of the Grimaldi Group who was also present at the launching with his colleagues .

In his speech he expressed his satisfaction that after a year Grimaldi was cooperating again with Uljanik, and that in the years to follow the cooperation would intensify due to the construction of seven Ro-Ro car truck carriers.

Mr Kranjc also congratulated Uljanik's workers who had, under extremely hard weather conditions, completed the work in time and achieved a high degree of completion of the ship and quality.

The ship has ten garage decks, having a total parking area of 36,542 sq. metres and she is the last of four identical ships built for the Italian buyer.

After the launching , there was laid on the slipway the keel for Hull No. 471 – the sixth 4,900 car-truck carrier of the series for Ray Shipping having a deadweight of 12,300dwt.

This news is a total 6622 time has been read