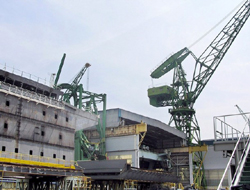 Colombo Dockyard stands to benefit from several concessions being considered in the new draft Sri Lankan government shipping policy, industry officials said. The policy, being discussed by the shipping community, says obstacles preventing local ship owners using local repair services and facilities will be removed. These relate to taxes charged on local ship owners if they get repairs done at Colombo Dockyard, a unit of Japan's Onomichi Dockyard which has its yard in Colombo port.

However, it said, benefits are given to foreign flagged or owned vessels that are not afforded to locally owned vessels which causes the local vessels to use dry docking facilities abroad.

The draft shipping policy also says "suitable remedies" will be taken to ensure Colombo Dockyard, the island's only shipbuilder, gets to enjoy the concessions and incentives offered to local companies in government procurement.

Presently, the yard is denied such incentives as it is registered under the island's Board of Investment (BOI), the investment promotion agency, which entitles it to tax concessions on imported inputs as well as earnings.

But Colombo Dockyard has lobbied to be given the same concessions granted to other local businesses in government procurement, as it is a local yard, although foreign owned.

This relates to the 10 percent price preference considered for local bidders against foreign bidder in the procurement of items by government institutions, which means that presently Colombo Dockyard has to bid 10 percent cheaper to win a bid.

The draft shipping policy says that the 10 percent limitation for the local market under the BOI agreement is a "disincentive" for the yard.

"In the absence of any other local builder capable of meeting local demand, removing such a ceiling will be considered by government as otherwise it would only open the doors for importation from outside," the policy said.

This news is a total 2906 time has been read